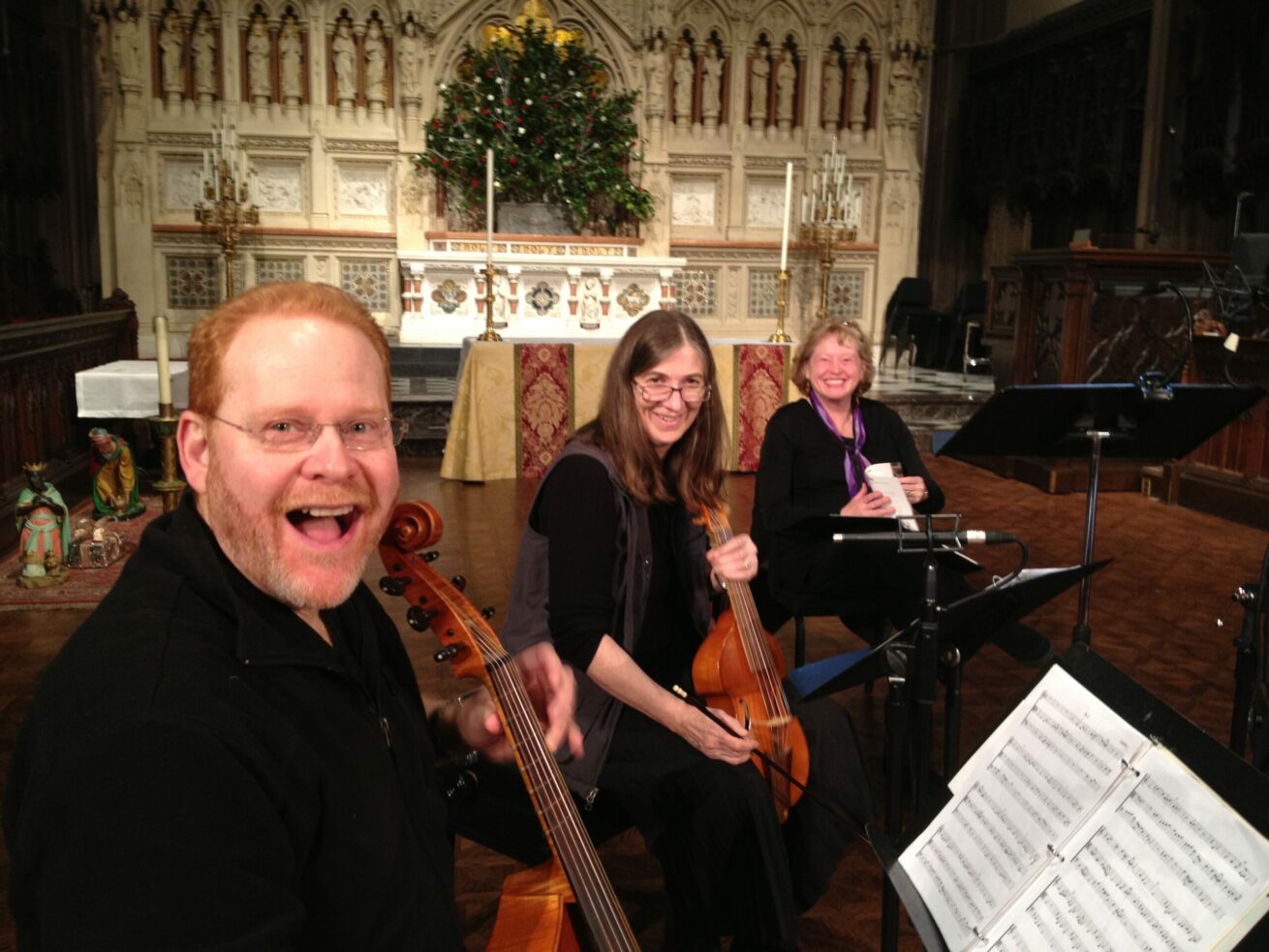 Just in case you hadn’t noticed, Dear Reader, the Christmas season has arrived.

In 2020 it may not look or feel precisely as it has in the past, but all of the elements are either present or will manifest soon enough:  poinsettias, Advent calendars, candy canes, the exquisite agony of participating in the mandatory company-wide Secret Santa…

Parthenia’s contribution to the festivities will take place on Thursday, December 3rd with a webcast of a 2012 concert of Early English Christmas Music from the Twelfth Night Festival at Trinity Church Wall Street.  Should you choose to join us, you might be interested to know the significance of this event.  You see, along with being a stellar presentation in a gorgeous space, this concert was a reunion, of sorts, for three former members (Larry, Ros and featured soprano Julianne Baird) of the legendary Waverly Consort.

If you’re new to the genre, the Waverly Consort might not be familiar to you, but their influence on the early music scene is absolutely seismic.  Without Waverly, in fact, there’s a very good chance you might not be reading this blog.  “Ros and I just hit it off,” Larry remembers, recalling their first meeting via Waverly.  It would take several years and a great deal of work before the quartet that now exists materialized, but Larry admits that, “It was pretty much from there that Parthenia started.”

The story of the Waverly Consort begins with Michael Jaffee and his wife and collaborator, Kay.  As graduate students of musicology at New York University in the late fifties, Michael and Kay bonded over a shared passion for early music.  At the time there were no recordings of early music, so Michael and Kay began a series of informal performances in their West 70s apartment to bring the genre to life.  Although conceived mostly for enjoyment, the concerts were extremely well-received; the enthusiasm and encouragement of one of their professors, Gustave Reese, was a particular motivating force. All of this activity culminated in the founding of an official early music ensemble, later to be christened the Waverly Consort.

As quaint as those beginnings might sound, it was merely the opening chapter of an astonishing story that would last more than half a century.  The chronology, members, and details defy easy summation, but, simply put, in between their debut at Carnegie Hall in 1961 and Michael’s death in 2019, the Waverly Consort was a trailblazing ensemble that carved out a space for early music which hadn’t previously existed.

“…the consort’s success, which included television appearances as well as recordings and concerts, encouraged a proliferation of groups devoted to excavating and bringing to life music from before the Baroque period.” – The New York Times

To this day, Larry, Ros and Julianne share heartfelt, vivid memories of their time with Waverly in the 1980s.  Julianne describes it as “the kindest Quaker experience,” and admits, “You shouldn’t have gotten paid for it.  It was just too much fun.”

Given alumnae like these, there’s no question that Waverly was an incubator of talent.  More importantly, though, Waverly was a school where impressionable young artists could learn the right lessons; everything from the art of crafting an effective concert program to providing a team with great snacks (an army marches on it’s stomach, after all) to the correct, elegant way to take a concluding bow.

“Mike and Kay really stressed the look of a concert, not just how it sounded,” Ros states.

Perhaps more than anything else, Waverly was a master class in how to be a mentor, a teacher, and a leader.  The Merriam-Webster online dictionary defines the Yiddish term macher as “a powerful, influential person” and “maker.”  This is the exact word that Julianne uses to describe Michael Jaffee, and testimony from Larry and Ros further supports this.  Ros remembers Mike stating that, “Waverly consort should become an institution like the New York Philharmonic or the American Ballet Theater.”  Jaffee’s drive was coupled with a sincere respect and desire to protect his collaborators.

“He was a director who lifted you up,” Larry recalls.  “He found the joy in anything you did.”

“There was no thought that Mike would ask us to rehearse without payment,” Julianne states.  Indeed, in a move which was highly unusual for the eighties, let alone 2020, Waverly was one of the few ensembles to consider the needs of it’s members beyond the rehearsal room or the stage. Ros, for instance, had both of her children on Waverly Consort health insurance.  “Mike was a giver,” Ros says.

Larry was particularly inspired by Mike’s leadership.  “When I decided to leave, Mike was disappointed,” Larry remembers, “but what I explained to him was how he had inspired me to be a macher, so that I could have my own group… and he understood that.”

In 1993, Michael and Kay left the Upper West Side for Patterson, New York.  Nevertheless, Waverly Consort remained active right up until Mike’s death.

Halloween is the holiday most closely associated with the supernatural, but Christmas has an equally strong link.  Remember A Christmas Carol?  Scrooge is visited by the specter of his erstwhile business partner Jacob Marley and, afterward, the spirits of Christmas Past, Present, and Yet to Come.  A Christmas Carol is a ghost story.  It perfectly outlines the magic of a time of year when the barriers that typically separate the past and present become porous.

So, please, join us on December 3rd.  Put on your slippers, enjoy some mulled wine, and, as you listen to our performance, be sure to remember your own ghosts, especially the machers that have made your life extraordinary.

About Kieran Walsh
Kieran Walsh is an author, musician and filmmaker residing in New York City.